An interim report for the henge 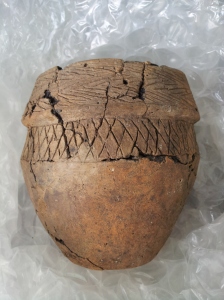 An interim report has just appeared in the CBA East Newsletter for September 2013, which can be found on pages 6 to 8. It is up-to-date as far as Easter 2013, but doesn’t include any of the exciting details revealed this summer. When I have an interim report ready covering all four seasons’ work, I will post it here.

In the meantime, enjoy the image of the small collared urn found in 2012. Although the interim refers to it as “complete”, the conservator discovered that it is in fact only half of the vessel. Unusually for a collared urn, it did not contain any cremated bone and was not an accessory vessel within a burial. Collared urns are usually associated with the Early Bronze Age, but there are a few with radiocarbon dates stretching back as far as 2500 BC, such as this example from Wilton Moor, Kirkleatham (North Yorkshire). Given the complete lack of diagnostic Early Bronze Age lithics and the rarity of Beaker pottery (I have seen only a couple of sherds, although there are probably more than that) from the Stapleton’s Field henge, we can perhaps suggest that this is a Late Neolithic example of the type.

Norton Community Archaeology Group has been using the name Stapleton’s Field to refer to the site for some years now. When the group was first founded in 2007, we referred to it as “Top Field”, but by 2009 the late Deborah Giles had found out that this was not the correct name and we began to use the present name. We had always known that the name Stapleton was that of a twentieth-century tenant farmer and there seemed to be no information about any earlier name this parcel of land might have had. During the Open Day on 25 August 2013, though, I met Mr Stapleton’s daughter-in-law who told me that, although he would have been flattered to think that we were calling the field after him, its correct name is Hundred Acre Field. So there you have it: both the names we have been using for the past six years are wrong! It’s going to be very difficult to think of the site in the future as the Hundred Acre Field henge…