Another very busy day, with lots of people. Fortunately, a fair few of them are reasonably experienced, so I’m hoping we’ll make further progress, having been good yesterday afternoon, when I wasn’t on site. Tony is planning context (6), which has now been fully exposed, and once that’s done, we can remove it to expose (7) underneath. There is a little topsoil left, but it ought to be gone before the end of the day.

At the north-western end of the trench, as (7) is being exposed where it’s not overlain by (6), it appears to be on top of the rubbly material that underlies (2) further to the south-east. It also looks as if it might be on top of (8), although I’m not yet certain of that.

I’m also still not certain about what’s going on in the bottom of the hollow way. The material is still very topsoil-like, but it is a lot darker (it’s clearly much damper). I can’t tell whether it’s filling a deliberately cut ditch or just a rut created by wheeled traffic at the edge of the road. As Alan is defining (9), it does seem to be dipping down more sharply as it gets toward the bottom of the slope. 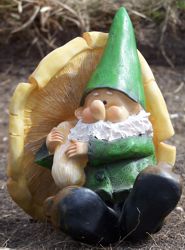 We now seem to have a temporary site mascot, Fred the Metrognome. All based around David Bowie’sThe Laughing Gnome, which I made the mistake of playing to some of the younger members of the team…

Today, I’m feeling a lot happier about progress, although it’s become clear that we won’t finish the trench this year. As luck would have it, a friend of Alan’s has given the project a hundred square metres of geotextile that we can put under the backfilled soil to protect the archaeology until next year. The one catch is that it’s hitherto been used as a base for a heap of pig manure. At least the grass will grow back healthily!

I’ve had a somewhat disrupted day, which means I’ve written very little. Still, we managed to remove all the topsoil and just before packing up, George found an 1862 ha’penny in almost perfect condition. It was in the last little bit of topsoil, so it doesn’t upset any of my deductions from the stratified deposits.

I'm the Museum Curator and Heritage Access Officer for North Hertfordshire Museum. I was born and brought up in Letchworth Garden City, so I have a life-long connection with the area.
View all posts by Keith Fitzpatrick-Matthews »